The southern Rias, the Baias are more sunny and a bit more popular with sailors than the Altas, the northern Rias . As soon as you travel past Cape Finisterre the strong northerly Portuguese trade winds are blowing, but the streams are weaker and there are only small tidal ranges so you can make good speed. And except for the fishing flags that’s all over the place  it’s much less demanding than the french coast to sail here.

The first ria you encounter after the Cape is Ria Muros and we went for anchor in the bay just outside the harbour. Some spanish  guidebooks use the word “enxebre” to describe Muros. It means something like pure, characteristic, authentic and genuine and we can only agree. It’s a perfect way to describe this wonderful little fishing town.

It has a nice, long promenade along the harbour where you can sit and enjoy your tapas and/or a beer in the sunshine :-). Behind the white galleria style houses in the harbour the old town is climbing up the mountainside. The narrow winding alleys, sometimes only 40 cm wide, and stairs seems to be meandering up and around the hillside for miles and if you follow them you might find one of the many churches that date as far back as the 1300:s. The town itself has been dated back to 1286.We visited the Church of San Pedro which has enough atmosphere to completely knock you out when you enter! At least it had that effect on me 🙂 This is definitely one of our favourite places on our journey so far♥ 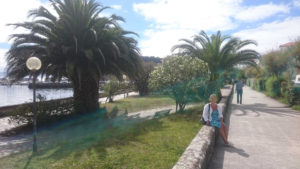 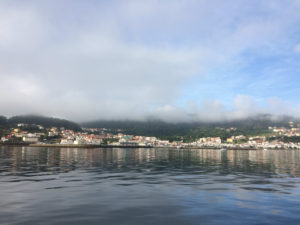 Leaving Muros in the morning fog we set sail for Ria Vigo, the last Ria in Galicia before the coast of Portugal.

Normally the fog disappear with the help of sun and wind, but the wind was not coming this day and so the fog stayed, getting thicker by the minute….We were going very slowly, constantly checking our instruments, AIS (Automatic Identification System) and Radar, but suddenly not five meters beside us a big fishing boat loomed up! The skipper was apparantly alone, standing at the bow taking his nets up but Rein managed to steer away at the last minute, and he said afterwards that we were so close so that he could see the whales on the man’s knickers through his open fly 🙂

Be as it may with that, but it was really a bit too close to be fun and it took us a while to get our heartrates to come back to normal again.

Most of the big ships have AIS(I think) but we have heard that sometimes they turn it off so that their fellow fishermen should not be able to see where they are! They have their secret places of course. I hope this fisherman was scared enough to keep it on in the future though, at least in the fog. But after this everything went well, the fog disappeared and we arrived in…

This is a BIG Ria, about 35 km long, with a maximum width of 7 km and with a number of cities, beaches(45), marinas, and harbours to chose from. The whole Ria has a population of about 420 000 inhabitants!

From the city of Vigo you can go by ferry to th Islas Cies, the twin islands of Monteagudo and Faro, connected by Playa de Rodas. “The best beach in the world” according to the english newspaper The Guardian. 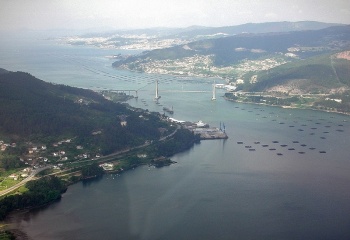 We chose to sail to the very end of the Ria, to Ensenada the San Simon. In what looks like a mountainlake in the alps a newly built, small marina is situated. But in the bay outside there’s actually a small archipelago with four islands. It’s truly beautiful here and with this climate and the island’s sheltered position in the Ria there should be tourists everywhere. But the islands have a very dark history which makes it difficult to make that happen.

There have been many sea battles going on here; from Sir Francis Drake and his english pirates/raiders in the 16:th century to the battle of Vigo 1702 during the war of Spanish Succession. But the reason for the island’s abandonment took place in the twentieth century during the Spanish Civil War. It was a war that turned brother against brother and father against son, and during this time the islands became prisons. In later years it became known that the prisons was the most horrible of places with mass executions and a lot of torture going on.

And as if this isn’t enough the islands were also, for a short while, in use as a summer residence for some of Franco’s elite guards.

Considering this it’s probably not surprising that the islands are now abandoned . As things stand, San Simon is a mini tourist haven waiting to happen. 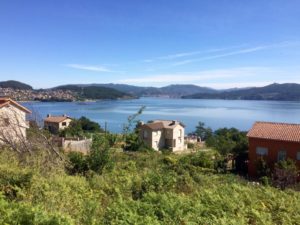 This is a medieval town situated at the southern outlet of Ria Vigo with the imposing castle Castelo de Monterreal overlooking the entrance to the city. While there’s a number of nice beaches in the Ria you can also go to the other side of Baiona that’s facing the Atlantic Ocean, with huge waves crashing against the wild cliffs. Wonderful!

The harbour is not big but there are some nice places where you can go for anchor, and we  found us a good spot. The waterlevel between high and low tide is about three meters here and while sitting on deck, peacefully enjoying the beautiful sunset, something black suddenly emerged about 50 meters from the boat. Hard to see clearly in the twilight and at first I thought it was a sweater,  but  as it turned out it was a rock! A sharp one! Not on the seachart!  When we started to look around we could see a few more of them emerging and we were just lucky that we (and our neighbours) had not anchored on top of one of them! So first thing next morning we went in to the marina. 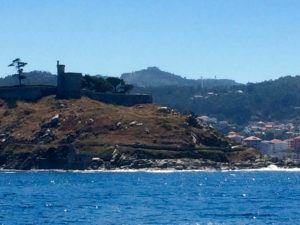 After this unexpected adventure it was time to say Goodbye to Galicia and sail for Portugal.