It’s now a year! since we travelled down the coast of Portugal and we have documented a lot on Facebook, but for those of you that don’t go in there, I want to give you an impression of the places we visited.

Our first harbor in Portugal was Viana do Castilo and we spent a couple of days exploring this lovely town famous for it’s architecture with so many different styles; Renaissance, Baroque, Art Deco, Romanesque, Flemish…
It is said to be one of the most beautiful Portuguese cities, and we have to agree! I specially love the tiles, in lovely patterns and colors, that you see everywhere on the houses and streets 💙  Some people say that the wonderful Fado music was based on the typical songs of the Minho region in Viana!🎵

Sailing along the Atlantic coast there are not many places sheltered enough to go for anchor and the fishing gear sticking up everywhere makes it extremely difficult to sail at night! 😳 You can’t avoid the sticks in the darkness so you just have to go into the Marinas. We tried to anchor anyway in Leixoes, a town about 4 km from Porto, where the Marina was full but it was not a place for rest! Our anchor alarm (luckily) woke us up several times during the night and there was a lot of coming and going of the fishing boats, so as early as possible the next morning we continued towards the river Douro and the city of Porto!

Leaving Leixoes we were met by a beautiful old sailing ship full of military guys that actually saluted us with their caps when they saw our flag! We took that as a good omen😊 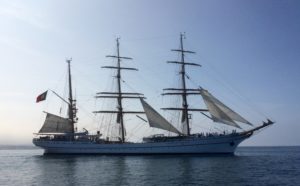 Porto is fantastic, amazing, fascinating and marvelous! The medieval Ribeira district (a world heritage Site) is a perfect place to let  yourself get lost and wander around for hours. The name of the city comes from a combination of Celtic and Latin, Portus Cale, and that is of course the origin of the name of Portugal itself. This is one of the oldest European centers and also one of our favorite cities😃💗

We went to the Porto Duoro Marina at the opposite side of the river Duoro from Porto and close to the city of Gaia. This is also a nice place to discover, where you can find many cellars or “caves” where the famous port wine is stored and aged and get a taste!

The marina was expensive, or so we thought at the time, but very nice with lovely 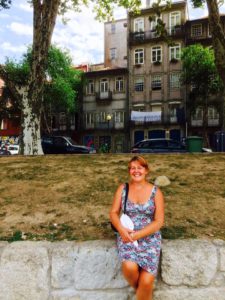 We spent three days in Porto and then we continued south to Figueira de Foz where we stayed for one night, and after that to Nazare, a lovely little town that is really three different parts; Praia(that means beach)-situated along the beach of course, Sitio-an old village on top of the high cliff overlooking Praia and Pederneira-a village on a high cliff behind Praia.

They are all very different from each other and worth exploring! From Praia to Sitio you can travel 318 m straight up the mountainside with a funicular railway built originaly 1888! It’s a very nice experience! Or, if you want/need to excercise, you can walk the 1 000 or so stairs up the hill. But the inclination is 42% so it’s heavy work!💪

Either way you do it, it’s worth getting up there! The village is very cute and the view is fantastic!

The town used to be known for its traditional costumes worn by the fishermen, and many of the older ladies are still wearing the dress called “Seven skirts”. It is a beautifully embroidered headscarf and apron over seven flannel skirts in different colors. It must have been very nice and warm to wear, meeting their men on the beach when they returned from their fishing trips at dawn:-)

The beautiful beach with it’s 2 km promenade is considered to be one of the best in Portugal, and Nazare is also a popular surfing destination. The very high breaking waves (up to 20-30 m) are formed because of the underwater Nazare Canyon that’s at least 5 000 m deep! At some parts of the beach it’s not allowed to swim because of the waves, it’s too dangerous! But it’s lovely to just stroll around. 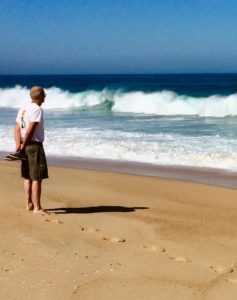 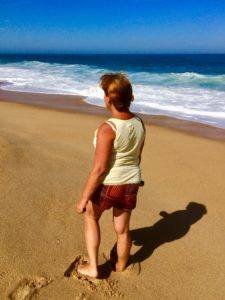 We continued south along the coast to Peniche, Caiscais and Sines….

Peniche is famous for it’s beaches and a kind of special tubular waves, Supertubos, that’s said to be fantastic for surfers! The marina was not open when we arrived and we couldn’t find the office even though we got pointed in the right direction, so we had to climb around the locked gate and fence in order to get out and in to the pontoons. People passing by were looking a bit strangely at us😃  If you are interested in history there’s a fort worth visiting where the dictator Salazar (1932-1968) kept the political prisoners during his Estado Novo regime!

The next day we continued to Caiscais about 30 km from Lisbon. Historically, Cascais was a minor fishing village, until King Luís I, in the 1870s, choose it as his royal summer retreat. Since then it’s been a major tourist destination that attracts lots of royalties as well as the international jetset and it is now called the Portuguese Riviera! The city has become one of the most visited destinations in Portugal and it’s estimated that around 1,2 million tourists stay in the cities hotels each year! 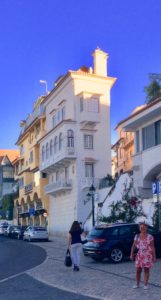 Next stop Sines-a small town very different from Caiscais. When you come into the harbor bay you are met by the huge oil refinery and the even bigger power plant! This is an industrial town but it has a lot of nice historical sites and tries to attract tourists. I like their special architecture that you can see on the picture below🏠

Vasco da Gama, the famous Portuguese explorer and commander of the very first ships to China, was born at the castle here in the year 1460!

In the marina (that was not as expensive as Caiscais but just as good) we met a very nice Swedish couple, Jens and Petra, on their way back to Sweden from the Balearics. They were very kind to give us their Pilot Books over Spain! A real treasure, thank you! And we hope that you will sail away again!💕

Continuing south and turning around Cape St Vincent, the “corner” of Portugal, you enter another climate zone and also another country, or so it seems. The name comes from the Arabic Al-Gharb that means “The West”. The moors ruled here for over 600 years( 716-13 something)and have of course left a lot of traces in the beautiful architecture and pottery, the food and the language.

In 1755 an enormous earthquake followed by a tsunami erased and heavily damaged big parts of the whole coastline. 85% of Lisbons buildings were destroyed and 15-20% of the population died! In Lagos the waves reached the top of the city walls and almost all the coastal towns and villages of the Algarve were heavily damaged, except Faro, which was protected by the sandy banks of the Ria Formosa. For many Portuguese coastal regions, including the Algarve, the destructive effects of the tsunami were more disastrous than those of the earthquake. Seismologists today estimate the Lisbon earthquake had a magnitude of 8,5-9,0 on the moment magnitude scale (former Richter scale) where a 12 is probably capable of destroying the whole planet😱 It was a real mean one! And shocks from the earthquake were felt throughout Europe as far as Finland and North Africa!

This part of the country is considered to be the biggest and most important Portuguese tourist region. In 2017 there were 7,1 million tourists visiting here!  A lot of central Europeans and Scandinavians also consider Algarve the best place in the world to retire. The mild Mediterranean like climate, the nice food and relatively low prices have attracted quite big communities of British, Dutch, Germans, Scandinavians and more to live here permanently.

We went to Lagos, Albufeira and Faros….

Lagos is one of the most visited cities in the Algarve region. Stunning beaches, a charming historic center still circled by the city walls that were constructed in the 16th century and a buzzing nightlife makes it very popular with the tourists. Lagos was the center of the Portuguese maritime exploration during the 15th century when Vasco da Gama set sail for Brazil, and the first slave market in Europe was based here. It was also the capital of Portugal until the horrible earthquake 1755 when Faro had to take over.

The tsunami in 1755 left only 27 buildings standing and it took a long, long time for the town to come back to life again.

It has always been a fishing community,but between 1930-1960 there was a decline in the growth of the city, the factories were closing down and about half of the population disappeared to other places. Then in the 60s the tourists suddenly started to arrive, and have continued to do so since then!

We think Albufeira is quite beautiful with it’s old town and nice beaches but the tourists have completely taken it over! It has a large expat and retiree community, over a 100 bars and restaurants, golf courses and a lot of different kinds of holiday resorts. Though I can understand the attraction it’s not really what we are looking for. But….maybe we’ll come back some day and give both Lagos and Albufeira another chance. 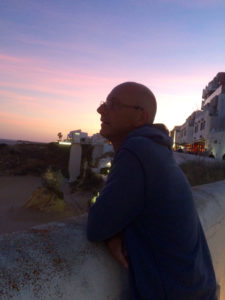 Faro and Olhao is something completely different. They are bordering a unique Nature park formed around the Ria Formosa lagoon.

The park is a rich and complex aquatic ecosystem (18400 hectares), consisting of barrier islands, peninsulas, salt marshes, channels, islets, freshwater ponds and sandy shorelines that separate the waters of the Ria Formosa and the Atlantic Ocean. Thus creating a unique environment for many, many species of flora and fauna. It’s a constantly changing landscape due to winds, currents and tides. We were anchored in the middle of it! Wonderful!💕

It’s a real paradise for bird watchers 🦆because many migratory birds spend their winter here nesting, including flamingoes. But you can also find other endangered species such as the chameleon and the seahorse. The park has one of the largest populations of seahorses in the world.
The Ria Formosa is also known for the Portuguese Water Dog, a breed native from the Algarve and almost threatened with extinction some decades ago. This is a definitely a place to come back to and explore, we like it💚💚 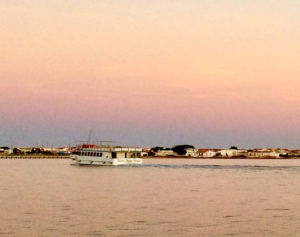 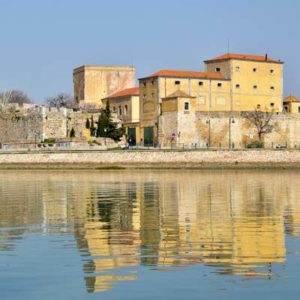 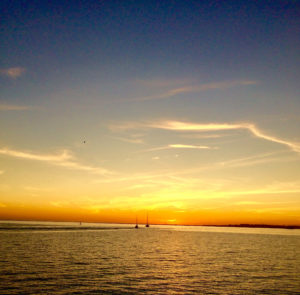 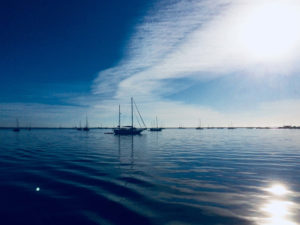 Portugal has been a wonderful experience and if I (Jill) have to choose my favorite places (so far) it will be like this: