After a few days on Belle Ile a weather window appeared that would make it possible for us to cross over the notorious Biscaye Bay. You need about 5 days of fair winds to cross over, or so the say. So we prepared the boat for a longer trip. Checked the engine, the mast, the safety equipment and bought food to last us for about two days and nights.

The Bay of Biscay, which is bounded by the west coast of France and the north coast of Spain is known for its rough seas and violent storms. It has a very bad reputation dating back from the day of the big sailing ships, and naturally sailing ships of old had a great fear of getting trapped here with the westerly gales. Then they couldn’t get away but were mercilessly thrown upon the rocky shores!

Especially during winter the weather can be very unpleasant, and up until recent years it happened regularly that ships would wreck in the storms. Improved ships, better engines and good weather predictions have helped a lot.

But it can still be very uncomfortable. The exposure to the Atlantic ocean and the differences in depth that instantly go from 3000-150 meter! can make the long swells from the ocean to quickly pile up into very steep waves. Some of the curved coast is rocky and throw the waves back at you in a very confusing way. It sometimes look like the water is cooking!

There’s a lot of wild life going on under the water to! Many species of dolphins and whales  live here and it is one of the few places where beaked whales have been observed relatively frequently. And of course there’s a lot of beautiful seabirds such as the Gannets. We have seen a lot of these marvelously fast and agile divers ♥ 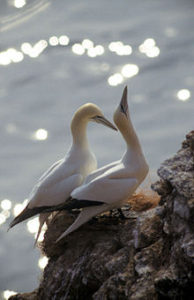 We wanted to go to Viveiro at the northwest coast of Spain and calculated with about 2,5 days. According to the predictions we would start with no wind, after a few hours it would pick up from the northwest and later on it would change to north and northeast and become a little bit hard.

The first 3 hours we went on the engine because there was no wind at all but then it picked up from the west and was (as always)harder than expected. We sailed a little more south to make it comfortable and we went fast. With 8 knots of speed, a reefed mainsail and rolled back genua we went into the night!

During the night the wind died down a bit and the next afternoon the wind was completely gone so we had to use the engine until the next morning. Very sad, but finally the wind from the northeast came and with only the Genua on we sailed on to Viveiro.

Thoughts about sleeping and night shifts

Since we went over the North Sea and on other night sailings we have experimented a bit with the sleeping schedules. We have tried with two-hourshifts (on the busy North Sea) but it’s really not enough to get rested. At least it isn’t for me, after two or three shifts it’s very hard to get up and it feels like I’m drunk (or having a very bad hangover). This time we slept in 4-hourshifts and that was much better!  Of course you get tired but not completely exhausted. But everybody has to find out what will function the best for them.

And it also depends on how much traffic there is during the night, how experienced you are, and how sure of yourself you feel standing alone by the wheel in the night! It’s a strange feeling to stand there in the night with several kilometers of water under the ship, the brilliant and starry sky high above, not another life in sight and knowing that you are just a very tiny spot on the ocean on the planet Earth in the Universe 🙂 It’s wonderful, but only as long as you don’t see any strange lights moving fast towards you of course! 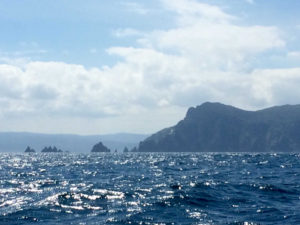 The shortest route in a straight line from Belle Ile to Viveiro was 300 NM but we made a detour to make it more comfortable so the whole trip was 327 NM, and we did it in 50 hours! Feels really great to have done it and maybe we were lucky but it was not so bad 🙂

On our way we encountered 2 merchant ships and a few yachts and were the ocean came from 3000 m back to 150 m there was suddenly a lot of fishing vessels. It was fun to see on the AIS (Automatic Identification System) that they were from a lot of different nationalities but that they all stick together during the night.

When we entered the Ria (Spanish fjord) we noticed a kind of wing sticking out of  the water. We thought it was a plane that had crashed but later we heard from the harbor master that a ship has lost its cargo at the entrance. It was 40 blades for windmills each of them 40 meters long and that they could pop up at any moment! So far they had found 10 blades so 30 of them were still floating around. Not a nice idea to realize that we were sailing full speed into the bay with those invisible blades floating around.

The entrance to the Ria was easy to approach, slowly the waves became smaller and soon we sailed up the river. There was a perfect, very quiet harbor between high mountains so that no wind and no waves from the ocean could get in and the boat didn’t move at all when we went to sleep. We were in Spain♠ 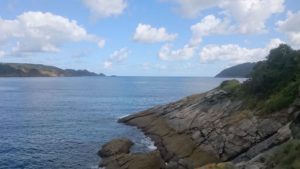