As soon the temperatures dropped I started on the inside job. Taking care of the engine room. When I started to take out wiring I wanted to replace I noticed that the diode bridge that was installed was completely ruined and strangely wired. The generator on the engine (with a charging computer) charged the engine battery but has it sensor cable connected to the domestic battery. It explained why, when the main switch was on engine battery, the Voltmeter went up to 17V (The computer measured 12 v but was trying to get more power into the battery, not knowing it was charging another battery). Furthermore a lot of things were done in the engine room (big.. big maintenance on the engine, replacing the generator, reinforcing battery containers, replacing charger, Installing inverter, solar charger, saltwater pump, replacing fuel system, etc.).

Then it was time to start with the tanks. I started with the fuel tanks after emptying them (for days I didn’t have to put diesel in the car). They didn’t have inspection holes so that was the first job, to cut holes in the tanks. The tanks inside were in very good shape, no rust and just a little bit of sludge on the walls. So after cleaning I closed them again. The outside of the tanks were repainted and the tanks were put back into place. To take them out I had to cut out the superstructure of the floor. So I had to remake that also. I made it a ‘little bit stronger even though one Christmas we 8 people had been standing on this floor. After that the water tanks were cleaned, they had already inspection hatches so the job was not too difficult. The tanks were also not too dirty only the cement layer was laying on the bottom and I took it out (it was probably laying there for decades).

Furthermore I installed the water maker. Made some new furniture 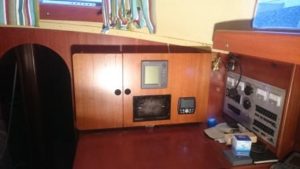 (A closet over the charttable with the instruments built in, and a drawer in one of the bunks so it was more easy to use). We also thought the carpets were destroyed after the oil spill by the English mechanics. After that we didn’t take care anymore so they were looking horrible. But after looking at new carpet we gave it a try anyway. So every carpet was soaked in the bathtub for the whole night (if you see what came out of it, you will never let your children play on those carpets again) and then cleaned with the high pressure pump and… They are looking like new (the drying took days). Saved us another €500…. kassa.

And furthermore. Rewiring, making order into the spaghetti of wires (the originals were very good but after that a lot of things were added). New pipes for the saltwater system. Reordering equipment (VHF, navigation receiver, AIS transponder, computer..). Making a solution so the cushions won’t drop anymore. Installing wipers (story by itself).