The summer in 2016 was mostly spent on the maintenance on deck. The fittings of the poles were reinforced because there were a lot of stress-cracks. By opening the ceiling inside I could see why. They fitted the poles with small bolts 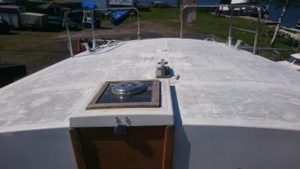 without a counterplate and they didn’t use the whole sandwich construction but only the outerlayer. So all those holes were redone (Replaced the sandwich core with reinforced polyester and then drilled new holes and bolted with real counterplates). This also meant I had to strip half the interior to reach all the bolts, and a lot of running up and down. The antislip was replaced with TBS antislip and the white parts are covered with vinyl. And of course a lot of other things on deck 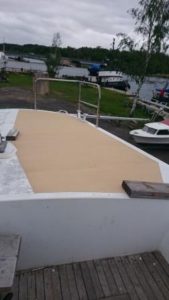 (new hatches, resealing windows, replacing instruments, replacing the rubber fender etc. etc.). The windvane (Atlantic S600) was installed and a bathingplatform with swimmingladder was installed. The summer and first part of autumn went by quickly.