Our stay in Kalmar is nice but also hard work. We went to Kalmar to meet with Judy and Jonatan but it is also a good place for maintenance.
When the boat went into the water there were still things left to do. We decided to make the boat livable and sailable and to do the rest of the things on the way. After a year on land all the systems has to be started up again.
In Kalmar we had a todolist. After the maiden trips from Norrköping to Nynäshamn and from Nynäshamn to Kalmar we found some things that didn’t function as it should be.
In Norrköping we found out that our V-drive (A kind of gearbox to change the direction of the propeller shaft) has cracked because of the ice. After a temporary repair in Norrköping we ordered a new in Italy and let it deliver in Kalmar (that worked perfect, when we arrived, the package was waiting for us. Thanks to Jonatan and Judy).
So, replacing the V-drive was the first thing. This was pretty straight forward, but after hanging the whole day upside down in the bilge my chest was bruised. Another big thing was a big voltage drop in the electrical system. Another day of searching and replacing, cleaning and changing went by but now the drop is gone.
The biggest problem was the cooling system of the engine. On our trip the cooling system has sprayed it coolant into the engine room (also over our new power converter). By now I know everything about the cooling system. After

a little hole in it and the new one had not. And that was the whole problem. After drilling a little hole in the thermostat the problem was solved. No more exploding hoses anymore but I think captain Haddock would have been proud of me.

Well the todo list has shortened (not ended) and we are ready to continue.

During our stay we had a lot of wind in the harbor and the waves in the ‘Kalmar sound’ were aiming for Hoppetossa (of course in the middle of the night, so we couldn’t sleep). During that night I found out that our bathing platform 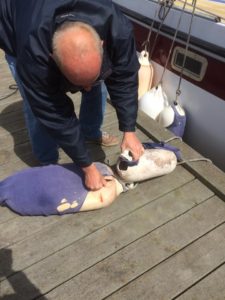 and our wind pilot are strongly built and connected. The whole night the waves were hitting it but it didn’t border the construction. The waves were so strong that the fenders were thrown on the bridge and 2 of them collapsed (I have never seen that before).